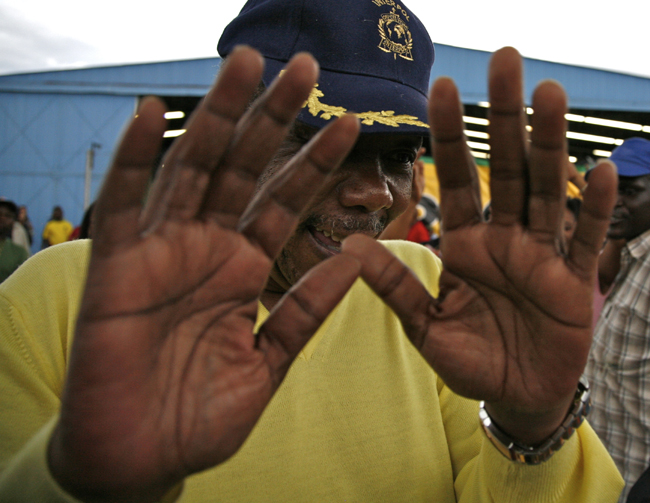 At around 9.45 this morning, on the fourth floor of the South Gauteng High Court, Jackie Selebi sat in a small ante-chamber looking sallow and dejected. Perhaps it was because he knew that Judge Meyer Joffe would brook no more postponements to his corruption trial – today was the day.

Then again, perhaps the former national police commissioner’s demeanour had something to do with the fact that there wasn’t much vocal support for him either inside or outside the court; no dancing or chanting of the ilk that welcomed Jacob Zuma or Tony Yengeni to their own high-profile courtroom appearances over the last few years. Selebi, by contrast, appeared decidedly unloved.

With a heavy police presence at one of the most controversial trials in ages, Selebi pled ‘not guilty’ to the counts of graft and defeating the ends of justice brought against him. Selebi’s charges relate to payments he allegedly received from Glen ‘The Landlord’ Agliotti, former Hyundai chief executive Billy Rautenbach, and mining magnate Brett Kebble, whom Agliotti is accused of murdering.

In a statement read out in court this morning, Selebi’s defense counsel Jaap Cilliers said that his client was the victim of a ‘campaign’ orchestrated against him by former National Prosecuting Authority bosses Bulelani Ngcuka and Vusi Pikoli.

According to the statement, the NPA, and in particular the dissolved Directorate of Special Operations (DSO), or Scorpions, ‘leaked information to the press to destroy the accused’s reputation.’ The NPA/DSO also ‘provided false information to [the] court,’ said Cilliers, adding that the case against Selebi ‘was manipulated with mala fide intentions.’

As to what these intentions were, the statement didn’t mince words: Ngcuka and his successor Pikoli allegedly conspired with crime kingpins to bring Selebi down. Cilliers alleged that Ngcuka offered Rautenbach a deal whereby ongoing charges against him would be dropped in return for testifying against Selebi. Cilliers also alleged that Pikoli’s wife had received monetary ‘gratification’ from Kebble.

In the event, however, the judge did decide to postpone the start of the case for one more day – after the State requested more time to prepare its witnesses. But, Judge Joffe warned both counsels, ‘unnecessary filibustering must be avoided at all costs.’

The trail is set to resume at 9.15am on Tuesday, October 6. According to The Star, the first witness to testify against Selebi will be his erstwhile friend and self-confessed drug dealer, Agliotti.