Peruvian court awards ex-prez free room and board for l...

Peruvian court awards ex-prez free room and board for life 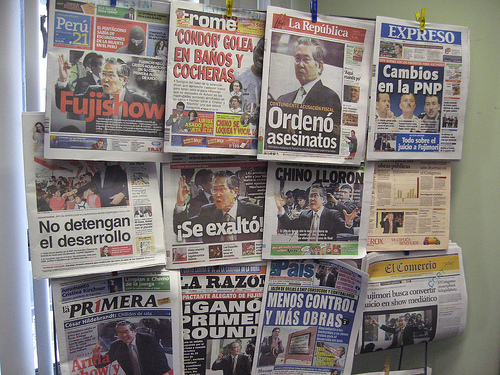 An unrepentant ex-president now looks set to spend the rest of his life in the big house.

Ex-president Alberto Fujimori – the recipient of three previous convictions, received a new six-year sentence for corruption. Fujimori already faces the prospect of spending the rest of his life in the big house from his previous trials. This time around, he also received a $9 million fine for authorising wiretaps and bribes. This latest trial took two years and was televised throughout.

Although engaged and unrepentant early on in his courtroom appearances, more recently he seemed acceptant of his fate, often sleeping through the sessions. At the end, though, Fujimori refused to accept the verdict, saying “I move to nullify” at the end of the trial. He had pled guilty but this plea was apparently predicated upon the belief he would not get a fair trial from the special tribunal. Pleading guilty means he has avoided a lengthy trial that would sap his health and that could negatively impact upon his daughter’s planned run for the presidency herself in 2011.

Fujimori was extradited from Chile in 2007 and he was convicted then of authorizing military death squads, abuse of power for an illegal search and of embezzlement for paying his spy chief $15 million in state funds. Taken together, his concurrent prison terms mean Fujimori could be in jail until he was 92. But, if his daughter is elected president in two years’ time (and she leads in some polls) she would likely pardon her father. Fujimori pere remains popular with many in Peru for his effectiveness in crushing the Maoist Shining Path guerilla bands.

The court convicted Fujimori of having his former spy chief, Vladimiro Montesinos, use state funds to manipulate and consolidate control of the nation, wiretapping 28 other politicians, journalists and business figures, bribing numerous congressmen, TV station staff and a newspaper editorial board to support his presidential candidacy in 2000 .

Although he has been fined $9 million, state officers have never found any of the money he is presumed to have embezzled. His intelligence chief and close aide, Montesinos, was given up by his Swiss bankers, leading to his conviction but Fujimori says he was penniless and lived off of the kindness of friends while he was in exile in Japan. Fujimori claimed the right to Japanese citizenship by virtue of his family origins as Japanese immigrants to Peru before World War II.

Alberto Fujimori was president of Peru from 1990 to 2000. An economist and head of La Molina University, he attended the University of Strasbourg in France and the University of Wisconsin in America. He scored an upset in the 1990 presidential elections, inheriting a nation experiencing a severe economic crisis and facing one of Latin America’s most brutal guerrilla insurgencies, the Shining Path. During his tenure, he slashed inflation and restored economic confidence by cutting subsidies, aggressively collecting taxes, and raising prices.

The victor in Peru’s 1990 presidential election faced a nearly impossible challenge. Its $20 billion foreign debt had not been serviced regularly in several years. A ten-year war with the Sendero Luminoso (Shining Path) guerrillas, fanatical Maoists, had taken 20 000 lives. International drug traffickers had established a powerful presence within the country. Nevertheless, nine candidates vied for the presidency, including internationally renowned novelist, Mario Vargas Llosa. Vargas Llosa’s shock therapy economic plan clearly startled voters and Fujimori surged in popularity, forcing a runoff with Vargas Llosa, which he subsequently won, with 56.6% of the total. Despite his own stringent economic policies that provoked serious rioting and strikes, his administration ultimately did bring down inflation, allowing space for the rest of his economic plan.

In 1992, he imposed harsh political measures and declared emergency rule to combat corruption and the Shining Path terrorism. Despite popularity from significant parts of the public, Fujimori was widely criticized for autocratic rule and suppression of opposition voices.

In December of 1996, Peru and Fujimori became the center of attention once again as hundreds of foreign dignitaries were held hostage in the Japanese ambassador’s mansion by an armed group of Tupac Amaru guerrillas. The hostage stance lasted for months, with the entire world waiting for a move to be made. On 22 April 1997, the seige ended when Peruvian commandos stormed the mansion. The resulting gunfire and ambush freed all remaining hostages and killed the 14 guerillas.

In 2000, after his chief adviser was accused of bribing opposition lawmakers, Fujimori offered to hold new presidential elections in which he would not run, but he ultimately resigned and went into exile in Japan.

In 2005 he visited Chile as a prelude to launching a bid for the Peruvian presidency and was detained there at Peru’s request and was extradited to Peru in 2007.