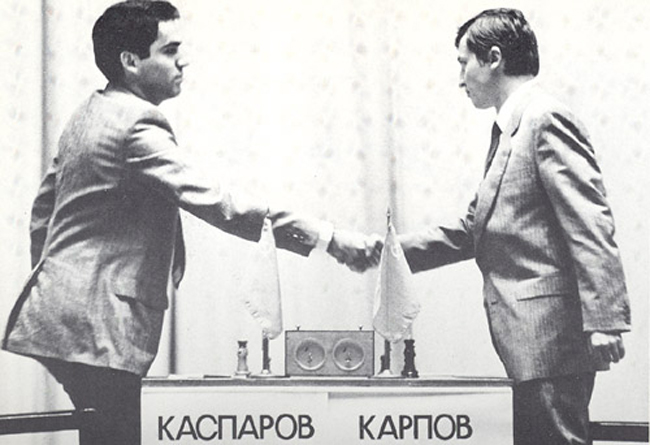 Not surprisingly, chess, where the struggle is psychological and intellectual, has spawned great, and sometimes heated, rivalries, among them Alexander Alekhine vs. José Raul Capablanca, Bobby Fischer vs. Boris Spassky and Viktor Korchnoi vs. Anatoly Karpov. In terms of duration and passion, however, none of those surpass the rivalry between Karpov and Garry Kasparov.

Kasparov and Karpov played five matches for the world championship from 1984 to 1990. In those contests, they faced each other 144 times and they were almost evenly matched. Kasparov won 21 games, Karpov won 19 and the other 104 were drawn.

Starting Tuesday, they will renew their rivalry by playing a 12-game match in Valencia, Spain. In the first four games, played on Tuesday and Wednesday, each player will start out with 25 minutes and have five seconds added to his time after each move. The last eight games will be Thursday and will be blitz (five minutes per player per game, with two seconds added to each player’s time after each move). There will be another match in Paris, from Dec. 11 to 13, and there is talk of having other matches in other cities.

Though the matches may be entertaining, they hold none of the drama of the earlier clashes. Karpov, who is now 58, has declined as a player and recently dropped out of the top 100 in the world rankings. Kasparov, 46, retired from regular competition in 2005, when he was still ranked No. 1, to pursue politics in Russia, and is now a leader of the government opposition. He has not been completely out of chess. Recently, he began training Magnus Carlsen, the talented 18-year-old grandmaster from Norway, who is ranked No. 4.

Kasparov‘s and Karpov’s rivalry is really unique in chess. To find a rivalry that even approaches it in terms of number of games, it is necessary to go back to 1834 when Louis-Charles Mahé de La Bourdonnais of France and Alexander McDonnell of Ireland played a series of six matches in London, with La Bourdonnais having a decisive advantage.

In addition to its length, Kasparov vs. Karpov was compelling for other reasons. The two players are stylistically opposites. Kasparov plays aggressively and somewhat intuitively, while Karpov is a technician, cool and precise, often taking his opponents apart bit by bit. Karpov was the favorite of the Kremlin. Kasparov was born in Baku, Azerbaijan, was half Jewish (his birth name was Weinstein), and was always a bit of a maverick, all of which made him less acceptable to the Soviet hierarchy. The two also intensely disliked each other.

That did not mean they did not respect each other as opponents. During the 1990 match, which was played in New York City and Lyon, France, after one of the games, the two sat on stage talking and analyzing, seemingly at ease. Afterward, Kasparov was asked why he had talked so long with his rival about the game. He replied that Karpov was the only the other person who could understand what was going on.